Each month City Square member Kara Kahnke profiles an individual who has found a home at City Square Church. 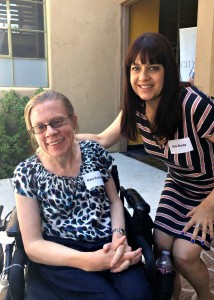 Debi Brady first came to City Square through the invitation of a friend. She grew up Methodist, and described feeling like she had to go to church when she was younger and do activities such as choir and youth group. She stopped going after high school when she no longer felt obligated to go with her family, but said she wanted to give it a try again as she got older. She now describes herself as spiritual rather than religious.

She noted that she comes to City Square because of the people. “They are all normal people who don’t pretend that they are super pious and don’t do anything wrong. They are who they are.” She praised the church for being accepting of everyone.

Debi said she also enjoys the small groups outside of church that allow her to socialize with others. She is currently part of the Creative Writing group and Painting group. In addition to the small groups, she said she appreciates that the church gives money to various charities throughout the community to help make it better.

Debi pointed out several reasons why someone might consider giving City Square a try. “It has cool people, great music, a good message, no pressure, and a causal atmosphere. Overall, you’ll leave with a good feeling.”