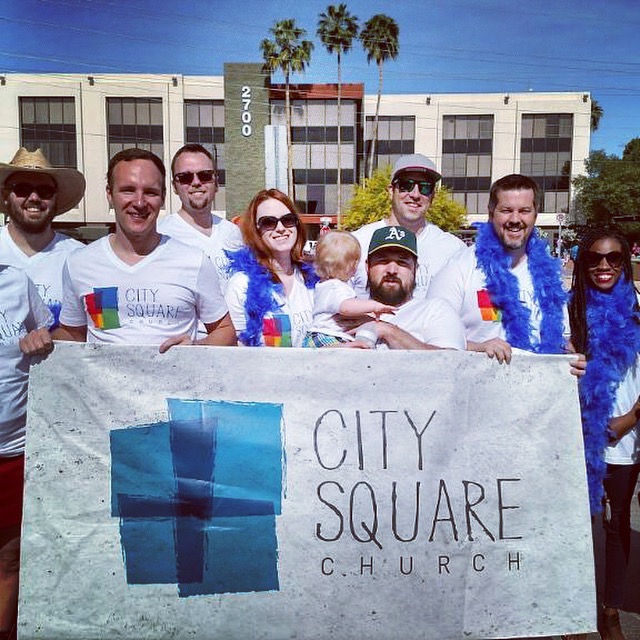 This is a guest post from City Square Church member, Tiffany Brown

The morning of April 12 was a morning of celebration. The City Square logo received a colorful Phoenix Pride Parade-worthy makeover and our t-shirts served as symbols of alliance and solidarity. Lisa and Everett Van Aller showed up with a wagon of supplies, City Square-stickered candy to hand out, and baby Elliott in tow – clearly the cutest member of our group. We broke bread and took communion in a Phoenix park-and-ride lot before joining the masses of feathers, leather, glitter, and happiness ready to walk – no, strut down 3rd Street.

Ben and Teneia Eichelberger saved the day, morphing mic stands into a banner holder. Sam Richard served as our unofficial hype man, handing out candy, running the lines giving high fives, and “getting low” to the club music that poured out of the double-decker bus in front of us. We all made jokes about the possibility of getting lung cancer from the smog billowing out of said bus, but made those jokes while smiling and still committed to walk, our health be damned! I passed out blue feather boas and participated in a dance party or five on the sidelines of the Phoenix Pride Parade as we walked for equality and understanding.

But I dreaded the last quarter of a mile of the parade, that wide, slow turn onto Indian School, because that’s where anti-gay protesters were set up, shouting hurtful rhetoric through megaphones, boasting neon signs that proclaimed people would go to hell, simply for falling in love. The church-affiliated demonstrators quoted Leviticus between their hateful slurs, trying to make scripture stick to rainbow balloons and furry go-go boots. It all seemed so strange against the backdrop of even louder dance music, its volume strategic, trying to drown out the hate.

Our group stood there for awhile in front of the protesters, holding the City Square banner high, taking a stand and showing these picketers that there is place for all of us in religion, faith, love, and peace, because these concepts are not independent of each other, but rather intertwined pieces of a meaningful life, a life everyone should be allowed without prejudice or judgment.

I thought to myself, What are these protesters experiencing? And seriously, what do they hope to gain?

Looking back, I would imagine they were feeling frustration, anxiety, and intolerance?all of those troublesome emotions you generally experience when trying to convince someone that you’re definitively right?simply because your paradigms don’t match up.

I asked myself more questions are I watched them scream and taunt everyone who walked past, trying desperately to be heard.

I suddenly, and gratefully, realized that I would never know the answers to these questions, because City Square is a faith community that would never dream of being on the other side of the barricades.

Instead, we’re a faith community built on the values of acceptance, equality, love, and compassion – a community that doesn’t need a megaphone to be heard – a community willing to walk a mile in another person’s stilettos to show our unity and alliance – a community that accepts every single person trying to figure out this exhausting, joyful, fleeting moment in the sun called life.

And that’s when I felt true pride that day, walking away from the shouts of misunderstanding and unhappiness, leaving it behind and moving forward with my brothers and sisters in faith toward the light.