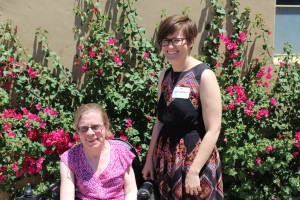 Although she considers herself mainly part of the Methodist tradition, Jessica Johnson grew up in a federated church that welcomed several different faith traditions to worship together. “It ran the gamut between people who were pretty conservative and very liberal. It was important to me to find a place that had a wide range of people where I could ask questions,” she said.

Jessica said she has found a similar openness at City Square. In addition to openness regarding faith traditions, she noted that she appreciates the church’s willingness to embrace various forms of creativity. Jessica came to City Square after her pervious church began to decline. She enjoyed the creative music at church, but soon learned that the creative outlets didn’t stop there. “There is space for people to connect with each other and to pursue their own ways of doing that, such as the Painting group or the Beer Brewing group,” she said. Jessica is currently part of the Spiritual Formation group, which meets weekly to discuss various aspects of faith.

Jessica pointed out that new attendees of City Square should know that this is a new, energized, and diverse community where people are excited to come together to learn about their faith. She said the community’s energy is part of what makes it so special. She also appreciates that City Square offers her the opportunity to participate in communion each week. “It’s a powerful statement of faith that everyone is fed and everyone is welcome at the table.”